The best way to view The Falls has to be from up in the air. In this way the whole relationship between the two neighbouring countries, the tranquil upper river, and the maelstrom below can be readily understood.

If you are arriving in Livingstone by plane, then, if you are lucky, the pilot may take a few sweeps over The Falls before landing. This is more likely if you are travelling by light aircraft.

But if you're not lucky enough to get a view of The Falls on arrival, as described above, then there are several other ways of achieving such a panoramic view - known as 'The Flight Of The Angels', based on David Livingstone's legendary comment that “scenes so lovely must have been gazed upon by angels in their flight”

At one time the alternative was to try to hire a light aircraft during your stay in the area, and then get a similar experience for yourself. However this has become replaced by a number of rather more exciting alternatives.

For some, no doubt excellent, reason, Microlight flights only operate early morning or late afternoon. You can choose between a 12 minute flight which will take you over the Zambezi River and onwards to The Victoria Falls, circle over the Falls and the islands and then return, or a 25 minute flight which will, in addition, fly upstream along the Zambezi River to Kalai Island, and then low level over the Mosi-oa-Tunya Park for possible game viewing. A camera is mounted on the microlights and guests may purchase pictures from the operator if they wish after the flight

Starting from Victoria Falls Town, you have the choice between an hour or hour and 15 minutes round trip, the actual Falls' flying time being roughly double in the first of these (plus the there-and-back trip). As with the Microlight flights, above, the difference lies in going on to include the possibility of game viewing as well. The helicopter seating is designed so that all passengers have a good view of the Falls and the scenery below.

If simply flying over the area, in one way or another, isn’t sufficient for you, then you can consider doing away with the actual aeroplane, or whatever. Skydiving takes place from Livingstone International Airport, after a flight to altitude over the Victoria Falls using a Cessna 206, and thousands of tandem jumps have already been made from here. It provides the ideal photo opportunity over the Victoria Falls. Once you approach the jump altitude you will be clipped to your tandem instructor and the final checks carried out. Then off you go! We haven’t been able to ascertain, however, exactly what happens so far as your landing is concerned! 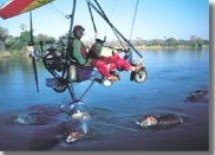 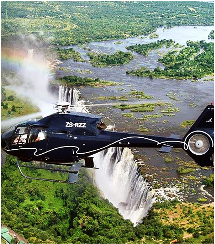 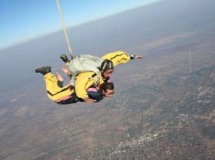