Victoria Falls looks as impressive today as it did upon its discovery by the renowned explorer, Dr David Livingstone, over 160 years ago.

The Falls are 1,708 m wide, dropping around 100 m into the Zambezi Gorge with up to 10000 cubic metres (over two million gallons) of water pouring over the edge every second.

One and a half times wider than the Niagara Falls, and twice its height, it is the world's biggest curtain of water.

The Falls are on the Zambezi River, Africa's fourth longest river (after the Nile, Congo and Niger). As we say above, it is reported that up to 10,000 cubic metres of water plummet over the edge every second at the height of its flow (although reducing to less than 4% of this at its driest time). We say 'reported', because a number of sources quote figures wildly different to this! It may be that they are getting confused between litres per second, gallons per minute, or whatever, but there is certainly a wide range of values quoted by - equally impeccable - sources.

It was designated a World Heritage site in December 1989, and is also recognised as one of the 'Seven Wonders of the World'. Not surprisingly, it has attracted many quotes, such as:

"No one can imagine the beauty of the view from anything witnessed in England. It had never been seen before by European eyes; but scenes so lovely must have been gazed upon by angels in their flight" - David Livingstone 1857.

"Truly it is a scene in which a man may well become aware of his own insignificance" - E. Holub 1881.

"One of if not the most transcendentally beautiful, natural phenomena on this side of Paradise" - F.C. Selous 1881

The native Kololo tribe described the Falls as ‘Mosi-oa-Tunya', translated as ‘The Smoke That Thunders'.

The key thing about the Falls is that, right up to the moment that the water descends over the 1700 m wide edge of the Falls, it departs from being a wide and placid, slow flowing river, before plunging into a narrow gorge below, that is only a few per cent of the width above, changing its character completely, and inevitably becoming a veritable maelstrom.

The above map is taken from a Rhodesian Railways pamphlet published about 75 years ago. Contrast this with the much more modern satellite view to the right.

The iconic Victoria Falls Bridge, which connects present-day Zambia with Zimbabwe was designed to connect the Cape to Cairo by railway. Cecil Rhodes wanted the bridge to be built sufficiently close to The Falls that travellers across it could get an unforgettable view, in addition to even getting wet by its spray. On 1st April 1905 the last section of the bridge was lowered into place, the entire bridge having been constructed in England, and sent piece by piece to Africa by boat and then by rail. Sadly Cecil Rhodes never lived to see its completion.

History of The Falls 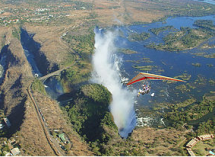 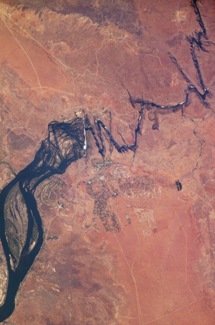